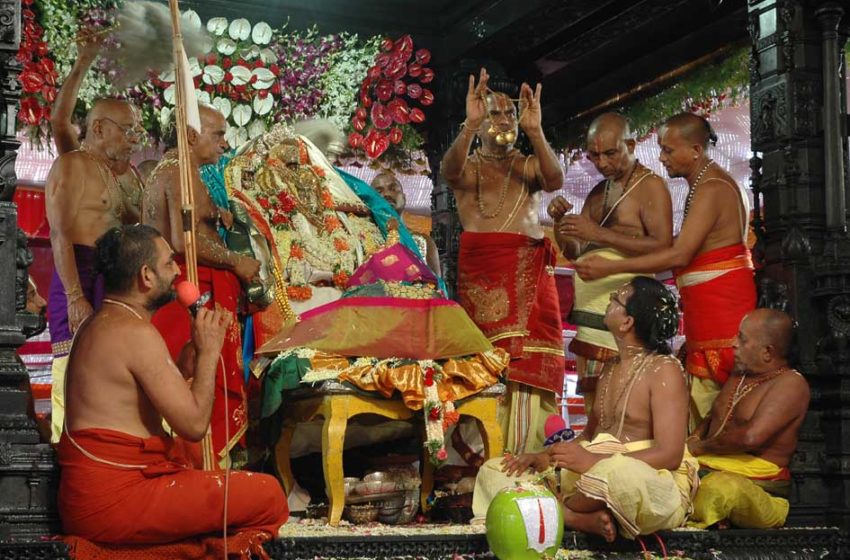 Tamil Nadu Hindu Religious & Charitable Endowments Department (HR&CE) Minister recently announced that Hindus of all castes would be appointed as priests in all temples under HR&CE. The HR & CE Minister also said women could also become priests, and the government will provide training to these women who wish to become temple priests. This announcement gained support from the leftists/communists, as expected. But, the Tamil Nadu BJP and a popular Right Wing media portal (which claims to represent the voice of the Hindu community) welcomed and supported this move. I will state why the interference of HR&CE in the appointment of temple priests is unconstitutional, illegal, and in violation of fundamental rights.

Article 25 of the Constitution says:

“Freedom of conscience and free profession, practice and propagation of religion

(1) Subject to public order, morality and health and to the other provisions of this Part, all persons are equally entitled to freedom of conscience and the right freely to profess, practise and propagate religion

(a) regulating or restricting any economic, financial, political or other secular activity which may be associated with religious practice;

(b) providing for social welfare and reform or the throwing open of Hindu religious institutions of a public character to all classes and sections of Hindus. Explanation I The wearing and carrying of kirpans shall be deemed to be included in the profession of the Sikh religion. Explanation II In sub-clause (b) of clause reference to Hindus shall be construed as including a reference to persons professing the Sikh, Jaina or Buddhist religion, and the reference to Hindu religious institutions shall be construed accordingly

Article 26 of the constitution talks about the following:

“Freedom to manage religious affairs Subject to public order, morality and health, every religious denomination or any section thereof shall have the right

(a) to establish and maintain institutions for religious and charitable purposes;

(b) to manage its own affairs in matters of religion;

(c) to own and acquire movable and immovable property; and

(d) to administer such property in accordance with law”

In my opinion, Article 26(a) is the most important part of Article 26. It also clearly says even if due to morality, health and public order, the government cannot poke in those temples under the administration of the Sampradayas. Most temples have a Dharmik Sampradaya as every temple belongs to a unique Sampradaya due to the unique traditions of that particular temple based on the historical significance of that particular temple. In some cases, traditions could be unique due to the nature and character of the deity in that specific temple. The word Dharmik Sampradaya is stated in Article 26 of the Hindi Constitution, which came into effect in 1987. Government has no right to change the denominational character of a temple or changing the age-old traditions of a temple. Such interferences violate Article 26, especially for denominational temples. There is a way a ritual or tradition is to be performed in certain temples, and that particular tradition or routine is being followed and practised for ages. Then if suddenly, out of nowhere government decide on how to perform the tradition/ritual, who can perform the tradition/ritual, where inside the temple it can be performed etc. And suppose the government decides who has to perform all of the traditions or practices by interfering in the criteria for appointment of the priests. In that case, that particular day won’t be far away when the government would decide to abandon the tradition(which was attempted earlier). This move of HR&CE about the appointment of priests sets a dangerous precedent.

Another aspect is that temples should run as per rules or Agamas. Agamas define and explain how that particular temple should function. Agamas are procedures relating to the worship of the deity inside the temple. The term Agama means “tradition” or “that which has come down”. The Agama texts describe cosmology, epistemology, philosophical doctrines, precepts on meditation and practices, four kinds of yoga, mantras, temple construction, deity worship and ways to attain sixfold desires.

In the 1972 Supreme Court Judgement, named Seshammal vs State of Tamil Nadu, the following is stated-

“The Agamas also have rules with regard to the Archakas. In Saivite temples, only a devotee of Siva, and there too, one belonging to a particular denomination or group or subgroup, is entitled to be the Archaka. If he is a Saivite, he cannot possibly be an Archaka in a Vaishnavite Agama temple to whatever caste he may belong and however learned he may be. Similarly, a Vaishnavite Archaka has no place as an Archaka in a Saivite temple. Indeed there is no bar to a Saivite worshipping in a Vaishnavite temple as a lay worshipper or vice versa. What the Agamas prohibit is his appointment as an Archaka in a temple of a different denomination. Shri R.Parthasarathi Bhattacharya, whose authority on Agama literature is unquestioned, has filed his affidavit in Writ Petition No. 442 of 1971 and stated in his affidavit, with special reference to the Vaikhanasa Sutra to which he belongs, that according to the texts of the Vaikhanasa Shastra (Agama), persons who are the followers of the four Rishi traditions of Bhrigu, Atri, Marichi and Kasyapa and born of Vaikhanasa parents are alone competent to do puja in Vaikhanasa temples of Vaishnavites. They only can touch the idols and perform the ceremonies and rituals.”

The above point of Vaikhanasa temples is further asserted in the June 2021 Madras High Court Judgement, named Mr.M.Karthikeyan vs Secretary To Government-

“None others, however, high placed in society as pontiffs or Acharyas, or even other Brahmins could touch the idol, do puja or even enter the GarbhaGriha. Not even a person belonging to another Agama is competent to do puja in Vaikhanasa temples. That is the general rule with regard to all these sectarian, denominational temples. It is, therefore, manifest that the Archaka of such a temple must also belong, according to the Agamas, to a particular denomination besides being proficient in the rituals appropriate to the worship of the particular deity. An Archaka of a different denomination is supposed to defile the image by his touch. Since it is of the essence of the religious faith of all worshippers that there should be no pollution or defilement of the idol under any circumstance, the Archaka undoubtedly occupies an important place in the matter of temple worship. Any State action which permits the defilement or pollution of the image by the touch of an Archaka not authorised by the Agamas would violently interfere with the religious faith and practices of the Hindu worshipper in a vital respect and would, therefore, be prima facie invalid under Article 25(1) of the Constitution”.

“It is the considered view of the court that the validity or otherwise of the impugned GO would depend on the facts of each case of appointment. What is found and held to be prescribed by one particular or a set of Agamas for a solitary or a group of temples, as may be, would be determinative of the issue. In this regard, it will be necessary to re-emphasis what has been already stated with regard to the purport and effect of Article 16(5) of the constitution, namely, that the exclusion of some and inclusion of a particular segment or denomination for appointment as Archakas would not violate Article 14 so long such inclusion/exclusion is not based on the criteria of caste, birth or any other constitutionally unacceptable parameter. So long as the prescription(s) under a particular Agama or Agamas is not contrary to any constitutional mandate as discussed above, the impugned GO dated 23.05.2006 by its blanket fiat to the effect that, “Any person who is a Hindu and possessing the requisite qualification and training can be appointed as an Archaka in Hindu temples” has the potential of falling foul of the dictum laid down in Seshammal (supra). Therefore, a determination of the contours of a claimed custom or usage would be imperative, and it is in that light that the validity of the impugned GO dated 23.05.2006 will have to be decided in each case of appointment of Archakas whenever and wherever the issue is raised.”