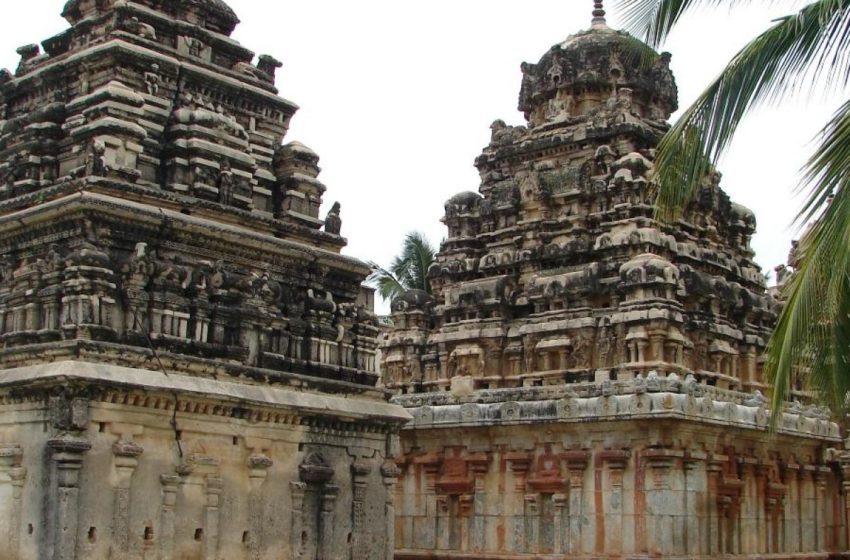 The Constitution of India gives a number of rights to its citizens to practice and propagate religion. Two particularly important rights are given via Articles 25 & 26.

Article 25 is as follows

25. Freedom of conscience and free profession, practice and propagation of religion

(1) Subject to public order, morality and health and to the other provisions of this Part, all persons are equally entitled to freedom of conscience and the right freely to profess, practise and propagate religion

(a) regulating or restricting any economic, financial, political or other secular activity which may be associated with religious practice;

(b) providing for social welfare and reform or the throwing open of Hindu religious institutions of a public character to all classes and sections of Hindus Explanation I The wearing and carrying of kirpans shall be deemed to be included in the profession of the Sikh religion Explanation II In sub clause (b) of clause reference to Hindus shall be construed as including a reference to persons professing the Sikh, Jaina or Buddhist religion, and the reference to Hindu religious institutions shall be construed accordingly

Article 26 bestows additional rights on certain category of religious institutions, and is as given below.

26. Freedom to manage religious affairs Subject to public order, morality and health, every religious denomination or any section thereof shall have the right

(a) to establish and maintain institutions for religious and charitable purposes;

(b) to manage its own affairs in matters of religion;

(c) to own and acquire movable and immovable property; and

(d) to administer such property in accordance with law

Through the above, at least on paper, the Constitution grants multiple rights to its citizens in order that they can pursue religious practices.

Prior to Independence, the British had instituted several laws through which they exercised control over Hindu temples and mathas. The Religious Endowment Act of 1863/1925, The Charitable Endowments Act of 1890, Madras Hindu Religious Endowment Act of 1927 are a few such Acts through which the British Government exercised some form of control, and regulation, over temples and mathas.

Post Independence, various state governments continued this practice — with many of the same Acts made applicable still. Subsequently, as the number of applicable Acts became numerous, and therefore unmanageable, state governments started replacing these Acts with their own, single, Act. These have been typically known as Hindu Religious & Charitable Endowment Acts. Since management of religious institutions is a state subject, each state has its own version of the HR & CE Act. For e.g. Karnataka, Maharashtra and Tamil Nadu — each have their own version of the HR & CE Act.

The strength for the state governments in enacting and enforcing these laws is derived from Article 25(2)(a) of the Constitution which allows the interference of the State in non-religious activities “associated” with religious practice. This particular clause states the following

(2) Nothing in this article shall affect the operation of any existing law or prevent the State from making any law — (a)regulating or restricting any economic, financial, political or other secular activity which may be associated with religious practice

The standard approach of governments has been to enact a law which permits “takeover” of a temple, upon there being a citing of “mismanagement” of the affairs of the temple. Since takeover of temples tramples upon the rights of those managing these institutions, many of these takeovers have naturally landed at the doorsteps of High Courts and even the Supreme Court.

While on one side, the argument of those opposing the takeover has been to cite the right guaranteed under Article 26(1) that allows citizens “to establish and maintain institutions for religious and charitable purposes”, the counter argument from the side of the governments has been to cite Article 25(2)(a).

Since Article 25(2)(a) allows only secular activities of the temple, such as economic, financial and political, to be regulated — the standard technique of the lawmakers has been to introduce a section in the Act that “grants” freedom to the temple on issues related to the rituals and customs of the temple.

For e.g. in the Sri Sahasra Lingeshwara Temple, … vs State Of Karnataka case in the Karnataka High Court that was related to the Karnataka HR & CE Act, the government argued that it had “stayed away” from “interference in the observance of customs, usage, ceremony and practice of the temple and institution”. The state argued that this was made possible by a certain provision in the Act — in this case vide Section 58.

Section 58 of the Karnataka HR & CE Act states the following

“The Commissioner, the Deputy Commissioner, and Assistant Commissioner and every other person exercising powers or performing functions under the Act shall not interfere with, and shall observe the customs, usages, ceremonies and practices appropriate to the Notified Institution or Declared Institution in respect of which such powers are exercised”

Thus, the main crux of the argument of governments has been that they do not interfere in the religious practices of the temple, and restrict themselves to managing and regulating only the secular activities.

Inter-twining of religious activities with financial and economic decisions

The scriptures that govern the administration of temples under sanatana dharma are known as Agamas. These agama shastras lay down rules and guidelines on every aspect of temple management. Sanatana dharma, being a pagan practice, is naturally composed of numerous rituals and customs which form an “integral” part of the “religion”.

Unlike Abrahamic religions where the core practices of the religion (conducted at their place of worship) is ordinarily just offering of prayers, the practices in a Hindu temple are overwhelmingly composed of rituals, customs and ceremonies.

A key attribute of all these rituals is that they make use of resources (a fundamental feature of pagan practices). Some of the resources are consumed in raw form while many others are processed resources. A second attribute attached to these rituals is that there is a gradation in their execution or conduct. This gradation — known commonly as adhama, madhyama and uttama kalpa — lower, average and higher — is to be employed when conducting any ritual or ceremony — depending upon various factors. The financial capability of the doer, the appropriate time and appropriate occasion are three examples of such factors.

Agama shastras mandate that there must never be vittha shatya — or miserliness — in any ritual. The amount and type of resources used must be according to the speciality or importance of the day or even the occasion for which the ritual or ceremony is being conducted.

A few examples will make this gradation clear.

These are just a small sample of examples provided to highlight the fact that the resources used in conducting the rituals and ceremonies in a temple are not fixed in nature. There are decisions to be made, based on various factors, on which, and how many, resources will be used. One should remember that the sannidhana of the diety is directly dependent upon the grandeur with which these ceremonies are performed (along with, of course, the austerity and devotion of the performers). The need to perform them in the best possible way — the uttama kalpa — is therefore a mandate.

An inevitable consequence of such a requirement is the financial/economic decision that is to be made with every such choice. Each and every ritual or ceremony is dependent upon a financial decision made by the administration. What this points out is that the while the definition of the rituals or ceremonies themselves may be fixed, and rarely changing, their execution is very dynamic and dependent hugely upon financial and economic decisions.

Inter-twining of financial and religious practices

From the type of lamp to be lit to the type of abhisheka material to the food offered as prasada — every single decision is contingent on financial factors. If a temple has been taken over by the state government — it is the officials of the state government who have to take these decisions. For e.g. all “declared institutions” under the Karnataka HR & CE Act are completely managed by government officials. It is the government therefore that determines the type and extent of a ritual or ceremony that is performed. The promise of “non interference” by the government in the religious practices, encoded as an assurance in the various Acts, is simply impossible to adhere to. In Hindu temples, a clean separation between religious and secular activities cannot be effected.

In simple words — the government manages even the religious practices of every temple it takes over.

This being the case, government takeover of temples is in complete violation of Article 25(1) of the Constitution, notwithstanding the attempt to restrict the takeover to activities covered under Article 25(2)(a)

P.S: This article attempts to dissect only one of the legal issues with the government takeover of temples. Fact is — the Karnataka High Court has found multiple other issues with the Karnataka HR & CE Act and held it unconstitutional. The matter is currently pending with the Supreme Court, which has stayed the High Court decision in the interim, in effect rendering the Act operational.