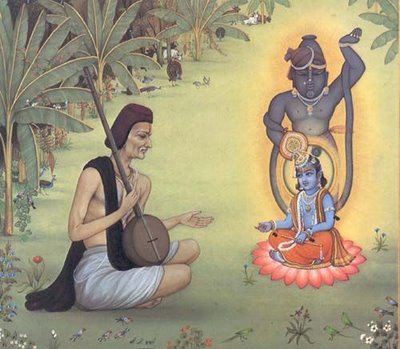 Chanting Hari-naam, the many exalted Names of God, Surdas the singer, the poet, and the ascetic, deprived of physical eyes but possessor of the most penetrating metaphysical vision and thus a true Seer, begged for alms from door to door in the neighbourhoods, marketplaces, and fields of Braj Bhumi. Blessed are the ears of those householders and passers-by, among whom the ‘blind’ Poet-Seer walked and freely dispensed the salvational grace of his heart-melting Krishna-Bhajans! Blessed is the land of Braj, the playfield of God Himself!

The Poet-Seer Surdas is foremost of those Vaishnava Bhakti poets who have ennobled the lyrical tradition of the Braj Bhasha of Northern India through their musical compositions, steeped in deeply inspired devotion to Sri Krishna. The very name of Surdas dually signifies loyalty to ‘Sur’ as in the ‘Devata’ or deity, and to ‘Sur’ as in the musical notes. The Hindu spiritual tradition acknowledges that Self-realisation can be attained by reaching the pinnacle of excellence in the musical pursuit as well as the zenith of Bhakti one-pointedly directed towards a specific Devata to whom one feels a natural attraction. Surdas stands at the confluence of these two streams of Hindu spirituality, and just like the Bhagirath of Itihasa-Purana, he too leads the mighty channel created by the conjoined forces of Sur-Sadhana and Bhakti-Sadhana in his songs.

A direct disciple of Vallabhacharya – the founder of the Pushti Marga of Vaishnavism and proponent of the Shuddha-Advaita – Surdas has been able to capture in his songs the very essence of India’s spiritual soul as it manifested itself through Bhakti in keeping with the ethos of his times. This is why his lyrics transcended sampradaya-boundaries and made their way to the grand collection of divinely inspired utterances of his times – the ‘Veda’ of that era, the Adi Granth or the Guru Granth Sahib. Hundreds of thousands of Hari-Bhajans, animated by the rasas of Madhurya (conjugal), Vatsalya (paternal), and Dasya (servitude) in the true spirit of the Bhagavata, or the Bhakta of Hari, are attributed to Surdas. He was a contemporary of another great proponent of Krishna-Bhakti as well as Hari-naam Sankirtan – the congregational singing and chanting of the Name of God – Mahaprabhu Sri Chaitanya Deva.

Not only the body of his devotional music, but even Surdas’s little-known life has inspired and enriched the literary repertoire of Indian languages. One of the multiple accounts which depict to us moderns the incidents leading to the loss of Surdas’s physical vision has been dramatized by Rabindranath Tagore in the poem “Surdas-er Prarthona” (The Prayer of Surdas), part of the poet’s lyrical anthology Manasi. Surdas and his songs represent that intense longing for God felt only in the heart of the Divine Lovelorn lone seeker, a Love and a Sadness of separation from the Source-Oneness, the separation which is at the heart of all separations, which cannot be spoken of but can perhaps be sung in pain-soaked poetry, which Bhagavata-s of a later era have spread worldwide, which has found a voice even in the foreign tongue, and of which poets of our own troubled times have sung thus:

My Sweet Lord! O my Lord!

I really wanna see you

I really wanna be with you

I really wanna see you, Lord

But it takes so long, my Lord!

(Note:  This article was first published on Rashtram blog and is being republished with the permission of the author)