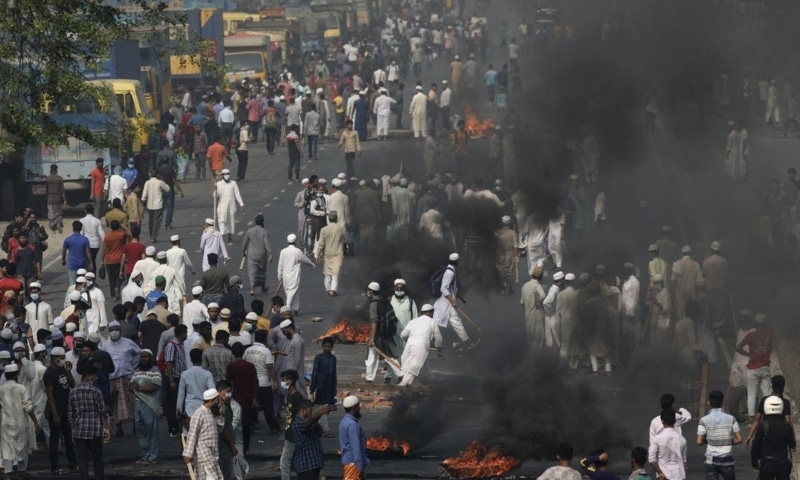 On the occasion of celebrating the 50th anniversary of the independence of Bangladesh and the birth centenary of Sheikh Mujibur Rahman, the country’s founder and father of the current Prime Minister Sheikh Hasina, leaders of the Maldives, Sri Lanka, Bhutan and Nepal were invited as guests of honour, along with India’s Prime Minister Narendra Modi. PM Modi’s two-day-visit set off a number of violent protests across Bangladesh. As stated by Reuters, the capital city of Dhaka and the district of Brahmanbaria, which neighbors the Indian state of Tripura, witnessed violence and hooliganism in the name of protests. The demonstrations were carried out by different outfits; however, this article will look more closely into the aspect of these protests that affected the Hindu community of Bangladesh.

According to an interview by Shireen Huq, the founder of the Bangladesh based feminist organisation Naripokkho, which she gave to BBC: “the protesters were not against India or the people of India. They were angry at the invitation to Mr. Modi, who’s extremely controversial and who’s known for his anti-Muslim stance”. For the past year, the Citizenship Amendment Act (2019), which is an amendment to the Citizenship Act (1955), would give eligibility for Indian citizenship to Hindu, Buddhist, Sikh, Parsi, Jain and Christian minorities who fled religious persecution from Afghanistan, Bangladesh and Pakistan before the end of December 2014, caused objections. The law agitated Dhaka as well; several official visits by Bangladeshi ministers were canceled around the same time period. Shirin Sharmin Chaudhury, a Member of the Parliament of Bangladesh, was scheduled to visit New Delhi, along with an 18-member-delegation. The visit was called off just as other high-profile official visits, such as the visits of Foreign Minister A. K. Abdul Momen and Home Minister Asaduzzaman Khan, quite soon after the Citizenship (Amendment) Bill had been passed by both Houses of Indian Parliament in December 2019. Officially, Dhaka maintained that the reason for the cancellation of the scheduled visits of their Ministers had nothing to do with the Indian Parliament passing the Citizenship Amendment Bill. Though it should be noted that the Foreign Minister A. K. Abdul Momen had not only dismissed the allegations that the Hindu minority of Bangladesh is facing oppression, but he had also gone on to say that this law would weaken “India’s historic position as a tolerant and a secular country”.

When PM Modi went on an official visit to Bangladesh, on the occasion of celebrating the 50th anniversary of Bangladesh, nationwide protests ensued. According to the Reuters’ reports, hundreds of members of the Hefazat-e-Islam, a Bangladeshi Islamist organisation, attacked Hindu temples, vehicles and public infrastructure on 28 March, 2021. The Hefazat protestors ransacked one of Brahmanbaria’s biggest Hindu temples, Sri Sri Anandamayee Kali Mandir. According to the report by The Daily Star, Ashis Paul, the president of Anandamayee Kalibari Temple Festival Celebration Committee said: “We were performing prayers for Dol Purnima, when 200-300 armed men broke the temple gate and barged into our ceremony. We tried to protect the idol of Goddess Kali, but they shoved us aside and vandalised the murti”. The temple’s priest Jibon Chakroborty said the attackers damaged everything and looted money and ornaments within 10 minutes. There were attacks on Hindus’ cremation grounds and temples in other parts of Bangladesh too. According to a report by journalist Azizul Shonchay, the memorial of Dhirendranath Datta, a Hindu minority minister from Brahmanbaria who was tortured to death by the Pakistan army during the 1971 Liberation war, lay vandalised and burnt.

Although most of the articles, including Shireen Huq from Naripokkho, tried to link the riots to the official visit of PM Modi, it is pivotal to understand that these riots were not anti-Modi in essence. If they were, why would Hindu temples and Hindu-owned buildings and memorials of freedom fighters be attacked then, especially when there was a large scale, Hefazat-e-Islam led mob attack on Hindus in Sunamganj a fortnight prior to PM Modi’s visit to Bangladesh? The violent attacks on Hindus in Sunamganj took place after Hefazat-e-Islam leaders Junaid Babunagari and Maulana Mamunul Haque attended a conference in Derai upazila, where they gave speeches against a Hindu youth from the village of Naogaon who allegedly had written a Facebook post criticizing Maulana Mamunul Haque. According to Md Serajul Islam’s report, Haque’s supporters brought out a procession in Naogaon, accusing the Hindu youngster of hurting the religious sentiments of Muslims. The following day, hundreds of Hefazat members from villages mostly inhabited by Muslims, attacked the predominantly Hindu village Naogaon. They ransacked Hindu houses and looted valuables as the residents fled the village. This was not an isolated incident, but part of ongoing religious persecution of the Hindu minority of Bangladesh, formerly East Pakistan. Bangladeshi Hindus have been systematically disenfranchised, massacred, and forced to abandon their homes and land.

The latest attack against Hindus in Brahmanbaria was just one among many thousands in the country’s history. However, this time the radio silence and the lack of condemnation regarding the attacks hit home for many diaspora Hindus, who have their roots in Bangladesh. Our team Stories of Bengali Hindus received many messages from Bangladeshi Hindus both from Bangladesh and from outside of Bangladesh, mostly expressing gratitude that for the first time they are seeing someone at least speaking up about the attacks against the Hindu community in Bangladesh without deflecting from the actual issue. The most common deflection tactics have, in the past, been people claiming that the attacks on Hindus were ‘isolated incidents’, and the subsequent exoduses happened due to ‘economic reasons’. This time, the deflection scheme is either to claim that the recent nationwide attacks accompanying the ‘protests’ by the Islamist organizations were an ‘anti-colonial struggle’, or to plainly deny or express doubts over who had carried out the attacks. Even some researchers at Amnesty South Asia were touting this stance. The attacks against Hindus and their places of worship were yet another demonstration to the Hindu minority that their purported association with India, through their religious identity, is frequently used by Islamists and their backers to rationalize violent mob attacks against them, a tradition that dates back to pre-1971 years, a time when Bangladesh was East Pakistan. Stories of Bengali Hindus has received a heartfelt message from a follower who is a diaspora Bengali Hindu with roots in Brahmanbaria, and whose family was personally affected by the riots. We have requested the follower to write a letter, which is being quoted in its original form here:

“The persecution of Hindus in Bangladesh has been an ongoing issue for decades. As children of immigrants in North America, we are often silenced by our own parents due to fear of attack on our remaining family back home. I don’t know if it’s a place I can even call home anymore. My house in Bangladesh was vandalized because it is a Hindu home. The temples near my house were vandalized, looted of gold and cash donations, and the murtis (idols) were broken. The ill-treatment of Hindus in Bangladesh is nothing new or shocking, but what is shocking is the continuous gaslighting, denying and blame in return. There have been no consequences from the government or any plan to intervene to prevent or even stop ongoing hate crimes. There is no media coverage or acknowledgement of anything to do with the minority population in Bangladesh. Brahmanbaria is a city that produced great talents and in the same city, musical institutions are being vandalized and burned down. Bangladesh is a country full of culture, talent and love, however it is a very dark time, and the diminishing population of Hindus is a clear indication of the growing problem. I want to thank the allies who have spoken up in support and are fighting for justice alongside us. To the people who are gaslighting, asking for sources, calling all of this fake news, you are part of the problem. To the people who are silent, you are turning a blind eye and you are the reason atrocities like these continue to happen. Have you had to sit in fear halfway across the World, unable to reach your family with news that the city is burning, and your house has been vandalized waiting to speak to them and know if they are okay? Continuing to live in fear even after escaping the country? Do you have veterans in your family who continue to live in fear in the very country they helped liberate? If you don’t, simply show your empathy and acknowledge that this is a problem. If we don’t acknowledge this situation and this problem, we cannot work towards a solution. I am not hopeful for the future because as the years go on, Bangladesh proves to be more and more intolerant and an inhabitable place for minorities, especially Hindus.”

This letter resonates with many of us Hindus with roots in what is today Bangladesh. Many of us grew up seeing and hearing how our community has been attacked, yet we could not tell anyone outside of our homes in the fear of further attacks. The follower wishes to remain anonymous due to the sensitive nature of the matter. However, we have come to know that this follower has grown up seeing silence and erasure whenever Hindus have been attacked in Bangladesh; no matter who the attackers were — whether a village mob, an extremist organization or government forces.

Stories of Bengali Hindus, in their own words, 'is a collective of descendants of East Bengali Hindu survivors of working to preserve forgotten stories of our persecution and our heritage'.