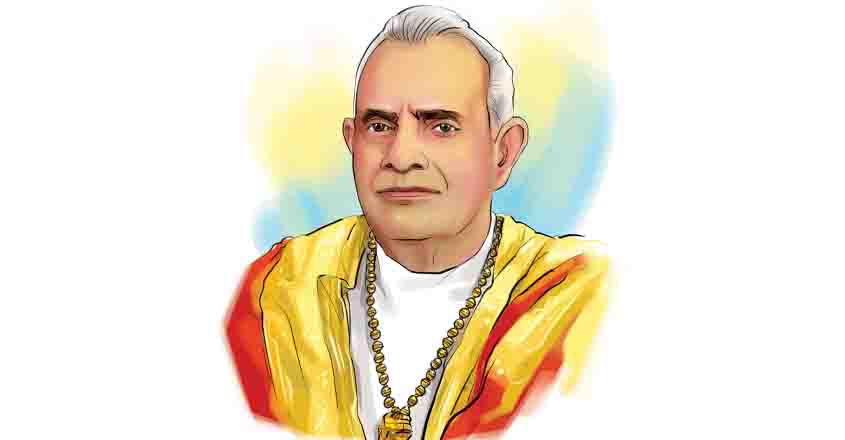 In recent history, Kerala witnessed a widespread resistance movement by Hindus to protect the famous Sabarimala Ayyappa temple from colonialist attacks. The Nair Service Society (NSS) played a pivotal role in the historic struggle for defending the indigenous Hindu community’s identity in the wake of a massive encroachment by a propped up’ Reformation’ scheme by colonial morality. Often the background and reasoning behind the formation of the grand old organisations like NSS are misused to propagate a cunning idea of ‘Renaissance and Social engineering’ in the 19th-century Hindu Society. Hence, it is imperative to look into the life of the great visionary Hindus who dedicated their lives to the strengthening of the Hindu communities and preserved dharma in Kerala on the onslaught of organised colonial attacks.

Mannathu Padmanabhan Pillai, popularly known as Bharatha Kesari, and the Madan Mohan Malviya of Kerala for his strong views on Nationalism and Education, is the founder of the Nair Service Society (NSS). Mannam was born in Perunna, Changanassery, in the Kottayam district of Kerala (then Travancore State) in 1878 and completed his primary education in an ‘Asan kalari’ (traditional indigenous school). He later joined a Malayalam school and became a teacher. Meanwhile, he learned law privately and became a well-known lawyer in the town at a young age.

Mannam perceived community service as a divine opportunity to uphold dharma. In his biography, ‘Bharata Kesari Mannathu Padmanabhan’, the author and his granddaughter, Dr. Sumathi Kutty Amma describe the foundation of NSS.

“Mannam told his intention to mother Parvathi amma. She immediately cleaned the house’s courtyard and lighted a traditional lamp, set the mat around it with flowers and vibhuti on a plantain leaf. Fourteen personalities, including Mannam and K Kelappan, prayed for divine blessings. Then they all took a vow to dedicate their lives to work for the prosperity of the community. Thus before the sacred lamp lit by Mannam’s mother, on the eve of Kollavarsham 1090 Thulam 15 (1914 October 31), NSS was born.”

The Nair Bhrityajana Sangam, which later became the Nair Service Society(NSS), was formed on a Vijayadashami day, an auspicious beginning fitting to the traditions of Hindus. Mannam was the first secretary of the Society. He continued to be the general secretary of the NSS till 1945 before becoming the president of the organisation, a position he occupied till 1947. He firmly believed that only by invigorating the ancient spiritual prowess would any social awakening stir Hindu society.

Christians dominated almost all the fields in Kottayam and Changanassery. Mannam wanted Hindus also to gain control over educational institutions and other areas of social importance. Although he wasn’t against communal harmony, he refused to sacrifice the independence and self-esteem of Hindus for such a friendship with other communities. He was motivated by the legacy of the Nair community and its Hindu traditions. Throughout his life, he had always argued for Hindu unity and was proud of the ancestral cultural heritage of Bharat. Mannam was also instrumental in bringing social harmony among various Hindu communities of Kerala. His active involvement in the Vaikom Satyagraha and the famous Guruvayur Satyagraha are classic examples of how he tried to uplift the Hindu society’s marginalised sections. The ‘Savarna Jatha‘ (a march of upper caste people) from Vaikom to Thiruvananthapuram, led by Mannam, commanded overwhelming public support to Vaikom Satyagraha. He was a good friend of Ayyankali and promoted the cause of the great Harijan leader by helping him start a publication called ‘Sadhujana Paripalini’ from Changanassery.

The first college established by Mannam was named NSS Hindu college. Later on, he established various colleges in the names of Chattambi Swami, Velu Thampi Dalawa, Pazhassi Raja etc – thus reclaiming the valorous history and re-establishing the dignity of a community that was in shambles during that time. The establishment of educational institutions through NSS challenged the stronghold of convents, established with the support of Churches, in the education system of Kerala. Today, NSS remains the biggest single management of educational institutions in Kerala. Thanks to Mannam and NSS, Hindus in Kerala are having institutions of their own at a time when minority appeasement laws have entirely handed over the educational setup of the state to Christians.

Mannam wanted all Hindu communities to establish a Hindu union college in Kollam collectively. Under his guidance formed a grand alliance of all castes and communities of the Hindus, the Hindu Maha Mandalam, on 1950 February 5th at Perunna NSS Office. The Hindu Maha Mandalam was a platform envisaged to advance the collective empowerment and endurance of the Hindus who have been pushed aside behind the growing clout of organised religions under colonial administrations. A political party, the Democratic Congress, was also formed to lobby for Hindu society’s interests. He also served as the Travancore Devaswom Board’s first president and reinvigorated many temples that had ceased to function.

Mannam was the president of the construction committee for the Vivekananda rock memorial at Kanyakumari. He organised a collection campaign of ‘one rupee’ which was a unique and hit campaign. Kanyakumari rock was on the verge of getting converted into a church. However, the timely intervention of Hindu leaders stopped it ànd thus a grand Memorial was set up to celebrate the memory of great Hindu monk Swami Vivekananda. NSS still continues that legacy by standing firm on Hindu issues and also by donating generously to Ram Temple construction at Ayodhya.

Mannam was a karma yogi who established many institutions and industries, nurturing the Nair community’s self-esteem. The educational institutions he started have created several intellectuals and gave a ray of hope to the weaker sections of the Hindu community, who would have been otherwise totally dependent on the conversion mafia. Even decades after his death, the organisation established by him stood as the last wall between the ‘modern progressive’ demons and the defeat of Hindus during the Sabarimala movement of 2018. Indeed, he stands out as a role model for those who dream of ushering a reawakening of the Hindu civilisation.

Jayasankar is a State Committee member of Bharatiya Janata Party in Kerala and a social activist.