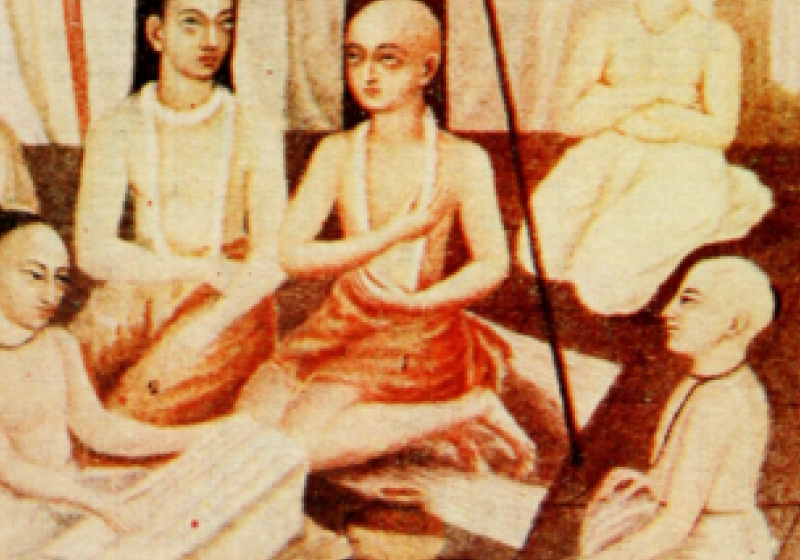 “I want neither wealth nor followers, nor a beautiful wife nor fruitive activities described in flowery language – but O Jagadiīśa! O Lord of the universe! All I want, life after life, is unmotivated, pure devotion unto You.”

Srī Srī Caitanya Caritāmṛta and Srī Srī Caitanya Bhāgavata are the two most important hagiographical works on Mahāprabhu Śrī Caitanya Deva. Both were written by his contemporaries. And both of these hagiographies concur on the narrative of a significant incident from Mahāprabhu Śrī Caitanya Deva’s life which took place when he had returned to his native Navadvīpa from Gayā. This incident involved a local Qazi, or a judge of the Sharia court, who had banned Hari Nāma Saṅkīrtana at Navadvīpa. At Gayā Dhāma, Mahāprabhu had undergone the Dīkṣā ceremony at the hands of Īśvara Purī. This initiation brought a sudden change in Mahāprabhu’s behaviour. Earlier, he used to be a very proud scholar and teacher – he outperformed every other scholar in the country in his knowledge of grammar, aesthetics, and many other fields of study. But since his return from Gaya, Mahāprabhu became completely enamoured of the chanting of Hari’s name. At this time, he also revealed, on multiple occasions before various people, his reality as Nārāyaṇa.

Let us return to the incident involving the Qazi. Having returned from Gayā Dhāma, Mahaprabhu had called upon the people of the town to participate in Hari Nāma Saṅkīrtana. People enthusiastically responded to his call, and daily hundreds of them joined the band of devotees performing Hari Nāma Saṅkīrtana, led by none other than Mahāprabhu himself. They went around the town and neighbouring villages, singing the many names of Hari:

This was the time when Bengal was being ruled by the Turkic Hussain Shahi dynasty. The ecstatic music of Hari Nāma Saṅkīrtana, accompanied by drums and cymbals, offended the fine sensibilities of the Qazi and his followers. Thereupon the Qazi decreed that Hari Nāma Saṅkīrtana in the town will be banned with immediate effect, and any violation of his lawful orders would attract a punishment which entails confiscation of the offender’s properties as well as renunciation of his religion – in other words, a forced conversion. To drive home the point, one evening the seething Qazi visited a house where Hari Nāma Saṅkīrtana was being performed, snatched a Srī Khol drum and smashed the instrument to the ground (pp. 102, Srī Srī Caitanya Caritāmṛta, ed. by Sukumar Sen & Tarapada Mukhopadhyay) with an admonition to the devotees present there, expressing his dismay at the sudden enthusiasm for expressing ‘Hinduani’ (colloquial Bangla term for Hindutva) among the townsfolk.

The simple townsfolk were scared, and they represented their fears to Mahāprabhu. Mahāprabhu straightaway asked them to go resume the Hari Nāma Saṅkīrtana without any fear of punishment. People went back to their homes and tried resuming the Hari Nāma Saṅkīrtana, but they couldn’t really do it with as much spontaneity as before, apprehending the Qazi’s wrath. Srī Srī Caitanya Caritāmṛta mentions that in a few days Mahāprabhu came to know about their apprehension in his own heart, and right away he went around calling upon everybody in the town to join him for a special Hari Nāma Saṅkīrtana ceremony that evening. He also ordered everyone to keep a torch ready at their homes. In the evening, Mahāprabhu formed three separate large bands of men and led these with his songs and dance in a euphoric performance of the Hari Nāma Saṅkīrtana. Mahāprabhu led these bands through the streets of the town of Navadvīpa and eventually reached the house of the Qazi. There, these devotees of Hari kept chanting the Lord’s name with redoubled enthusiasm and their roars made the Qazi’s heart tremble in fear. The Qazi hid himself inside his house and didn’t dare venturing out as the roars outside his residence kept getting stronger with every passing moment. At last people started vandalizing the garden and the buildings inside the Qazi’s premises. Mahāprabhu intervened, took his seat at the Qazi’s doorstep, and sent a decent guy to bring the Qazi before him.

The Qazi came with halting steps, his head bent downward. Mahāprabhu showed him due respect, made the poor chap sit nearby, and asked: “Am I not your guest? Why shy away from me, my dear good man? Is that your dharma?” The Qazi replied: “I’d heard that you came here in a furious mood, and so I hid myself in the hope that sire will calm down at some point. Now that you have indeed calmed down, I came running to greet you! It is my great fortune that I’ve got a chance to receive you at my door. Your maternal grandfather was from the same village that I am from, and hence you’re one of my own. Why, you’re my nephew! It goes without saying that an uncle will bear his nephew’s anger – but I hope that the nephew will neither take offense at his uncle’s doing!”

And after this exchange of pleasantries, a mild debate ensued between the two on the subject of cow slaughter. The Qazi tried to justify cow slaughter and consumption of beef by claiming that the Vedas allow such acts and that many sages had performed them. Mahāprabhu put him in his place by explaining that the Vedas have expressly forbidden cow slaughter and that is the reason why Hindus never partake in it. He also quoted instances from the Puranic literature in support of the yuga-specific Vedic prescription on the matter. The Qazi relented, and admitted something which would have attracted dire consequences upon him, had he admitted the same in post-independence ‘secular’ Republic of India. The interested reader may find the conversation between Mahāprabhu and the Qazi in the 17th chapter of the Ᾱdi Khaṇḍa of the Srī Srī Caitanya Caritāmṛta. (pp. 103 – 105 of the text ed. by Sen & Mukhopadhyay and texts 169 – 171 of ch. 17 in this English edition of the work)

Finally, with barely concealed laughter Mahāprabhu asked the Qazi to tell him the truth about the lack of any punitive action on the latter’s part upon the devotees performing Hari Nāma Saṅkīrtana in those intervening days. The Qazi recounted a most extraordinary story, which is as follows:

The Kazi said, “Everyone calls You Gaurahari. Please let me address You by that name. Kindly listen, O Gaurahari! If You come to a private place, I shall then explain the reason.”

The Lord replied, “All these men are My confidential associates. You may speak frankly. There is no reason to be afraid of them.”

The Kazi said, “When I went to the Hindu’s house, broke the drum and forbade the performance of congregational chanting, in my dreams that very night I saw a greatly fearful lion, roaring very loudly, His body like a human being’s and His face like a lion’s. While I was asleep, the lion jumped on my chest, laughing fiercely and gnashing His teeth. Placing its nails on my chest, the lion said in a grave voice, ‘I shall immediately bifurcate your chest as you broke the mṛdaṅga drum! You have forbidden the performance of My congregational chanting. Therefore I must destroy you!’ Being very much afraid of Him, I closed my eyes and trembled. Seeing me so afraid, the lion said, ‘I have defeated you just to teach you a lesson, but I must be merciful to you. On that day you did not create a very great disturbance. Therefore I have excused you and not taken your life. ‘But if you perform such activities again, I shall not be tolerant. At that time I shall kill you, your entire family…’ After saying this, the lion left, but I was very much afraid of Him. Just see the marks of His nails on my heart! After this description, the Kazi showed his chest. Having heard him and seen the marks, all the people there accepted the wonderful incident.

The Kazi continued, “I did not speak to anyone about this incident, but on that very day one of my orderlies came to see me. After coming to me, the orderly said, ‘When I went to stop the congregational chanting, suddenly flames struck my face. My beard was burned, and there were blisters on my cheeks.’ Every orderly who went gave the same description. After seeing this, I was very much afraid. I asked them not to stop the congregational chanting but to go sit down at home.”

This was also who Mahāprabhu Śrī Caitanya Deva was, the Protector who has promised to restore dharma in every age – who embodied our civilisation’s resistance to the many mischiefs it had had to suffer at the hands of the violent invader and the coloniser. This was as much a part of his life, his līlā on earth in this country, as his other monumental achievements like the restoration of Śrī Kṛṣṇa’s Vrindavan to its former glory as the sacred kṣetra that has been so vividly described in the Śrīmad Bhāgavata Purāṇa, or the expounding of a most magnificent philosophy of Acintyabhedābheda. In Ramachandra Gandhi’s words: “Mahaprabhu Caitanya’s characterisation of the advaita of Śrī Kṛṣṇa and Śrī Rādhā as acintyabhedābheda points to a possibility of metaphysical perfection in a future Kṛṣṇādvaita than which no more perfect philosophic vision is imaginable…” (“The Necessity of Śrī Kṛṣṇa”, in I Am Thou, p. 44, Ramachandra Gandhi)

The resistance that Mahāprabhu had led in Bengal has been recorded in great detail by his contemporaries in multiple hagiographical accounts – an aspect of the avatar that is often conveniently circumvented in the modern retellings of this magnificently Divine Life.

Those who often wonder how Bengal has survived the onslaught of multiple invasions and colonial regimes in the land and how one part of it still holds on to its Sanātana Dharma, herein lies the answer. The sacred plains of Bengal have been visited by the Veda Puruṣa on at least two occasions (the other being the appearance of Sri Ramakrishna Paramahamsa Deva) in the last five hundred years, which is practically modern age in the Hindu civilisational scale.

Mahāprabhu Śrī Caitanya Deva’s embodiment of Śrīmatī Rādhā Rāṇī and Śrī Kṛṣṇa in the same body is also a crowning statement on the Hindu civilisation’s integral vision on the question of identity. It shows the woeful inadequacy of modern and postmodern discourses on determining the individual’s identity with anchors such as male, female, or any other verbal marker of gender, of names (nāma) and forms (rūpa); and raises the bar for human identity to the highest conceivable station of metaphysics, namely that of a perfect harmony between the cosmic feminine principle and the cosmic masculine principle, between Bhakta and Īśvara, the Divine Lover and the Beloved Divinity, and points to the ultimate nonduality of Worshipper and the Worshipped.

Swami Vivekananda had once instructed his followers and brethren in the then nascent Ramakrishna Order to imbibe the examples of Mahāprabhu’s sacrifice, his intense love of God, the absolute pristine purity of his unmotivated Bhakti – the Jñānī’s Bhakti, and the power of vichāra along with that – the ability to discriminate between the real and the unreal; but most of all, the vast and limitless expanse of his heart, his all-pervading love directed at every creature.

On this Doljātra or the Dol-Purnima Tithi, the sacred occasion of Mahāprabhu’s appearance on the mortal plane, let us meditate upon this ‘Thakur’ of Bengal with the intent that his Bhāva may fill us to the core, and that he graces us with those matchless qualities that Swami ji had enumerated and sought for the bearers of his own Master’s mission.

Gandhi, Ramachandra. I Am Thou. Academy of Fine Arts and Literature, New Delhi :2011

Śrī Caitanya-caritāmṛta in the Bhaktivedanta Vedabase at https://vedabase.io/en/library/cc/