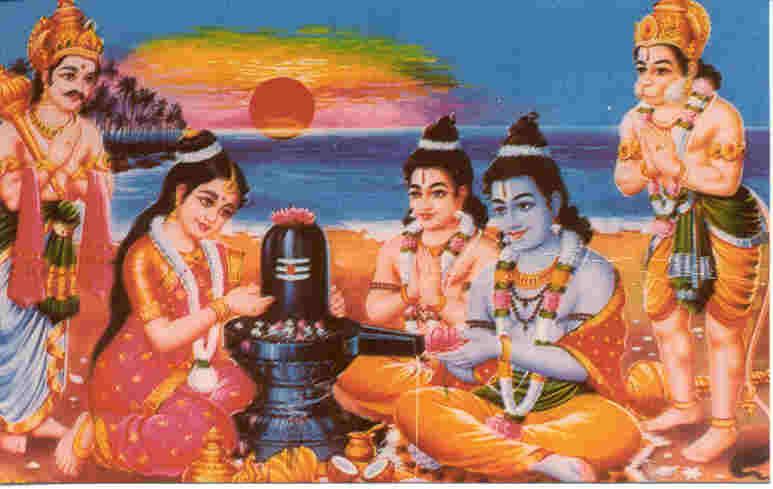 Puducherry CM provides wrong translation to the opposition leader. During the opposition leader’s interaction with Fishermen, a woman had raised a complaint to Rahul Gandhi. And the Puducherry CM wrongly translates it as the woman is praising the government. This is a serious issue. This must have been true with our scriptures as well. Imagine the countless number of verses across different scriptures that were deliberately misinterpreted and misquoted in the past which cultivated an entire section of antagonists against Sanatana Dharma.

Not so long ago, someone had tweeted, “Tell them we are Shiva bhakts”. This was in the context of donation to the Ram temple. So? If someone is Shiva bhakt, does that mean the person is forbidden from contributing to the cause of a Vishnu temple? Ridiculous. With their zero knowledge about Sanatana Dharma, these folks are leaving no stone unturned to spearhead a malicious campaign

1) Goddess Parvati asks Lord Shiva about the easiest way to recite the thousand names of Bhagwan Vishnu. To which Lord Shiva replies, by chanting the seven-letter Rama mantra a devotee receives the full benefits of chanting Vishnu Sahasranama.

By meditating on “Rama Rama Rama” (the Name of Rama), my Mind gets absorbed in the Divine Consciousness of Rama, which is Transcendental. The Name of Rama is as Great as the Thousand Names of God

Here Shiva is described as someone dear to Rama.

3) In the chapter 123 verse #19 from Yuddha kanda, while returning to Ayodhya , Shri Rama tells Seetha

“See this island, located in the middle of the ocean, where my troops were stationed. At this place, the lord Shiva (the supreme deity) formerly bestowed his grace on me.”

4) Chapter 119 of Yuddha Kanda describes Lord Shiva eulogizing Rama for defeating Ravana. Do not forget the fact that Ravana was one of the greatest devotees of Shiva.

The gist of Shiva’s eulogy Hearing the auspicious words thus spoken by Rama, Lord Shiva the Supreme Lord thereupon delivered the following still more beautiful speech: “O lotus-eyed, long-armed, broad-chested, annihilator of enemies and excellent among those upholding the cause of virtue! Thank heaven! You accomplished this task. Fortunately, has the fear born of Ravana – which increased the severe darkness on the entire world been removed by you, on the battle-field, O Rama! You are fit to go to the heaven, by comforting the depressed Bharata and the illustrious Kausalya as well as seeing Kaikeyi and Sumitra, the mother of Lakshmana having got the sovereignty of Ayodhya, bringing delight to your friends, stabilizing the back-bone in the race of Ikshvaku, getting excellent glory by performing a horse-sacrifice and by granting riches to Brahmanas. This king Dasaratha, your father in this mortal world and the highly glorious as well as the venerable person, is seated in an aerial car, O Rama! Having been delivered by you, his (godly) son, the glorious king obtained the abode of Indra the lord of celestials. You offer your respectful salutation to him, along with Lakshmana, your brother.”

5) Rameshwaram– One of the 12 Jyotirlingams

In the Brahma Canto of Skanda Purana, there is an entire section on Sethu Mahatmya. It covers in detail about Rama’s halt at Rameshwaram, pratishTa of Shiva Lingam at an auspicious muhurta, assigning Hanuman to bring a Lingam from Kailasa. Then consecration of a sand lingam by Rama as Vayu-putra could not gather on the fixed muhurta. It also describes how the sand lingam became a real linga and the one brought by Hanuman was also installed by Rama in a different spot.

Shiva vs Rama? You got to be kidding! We are THE epitome of pluralism.