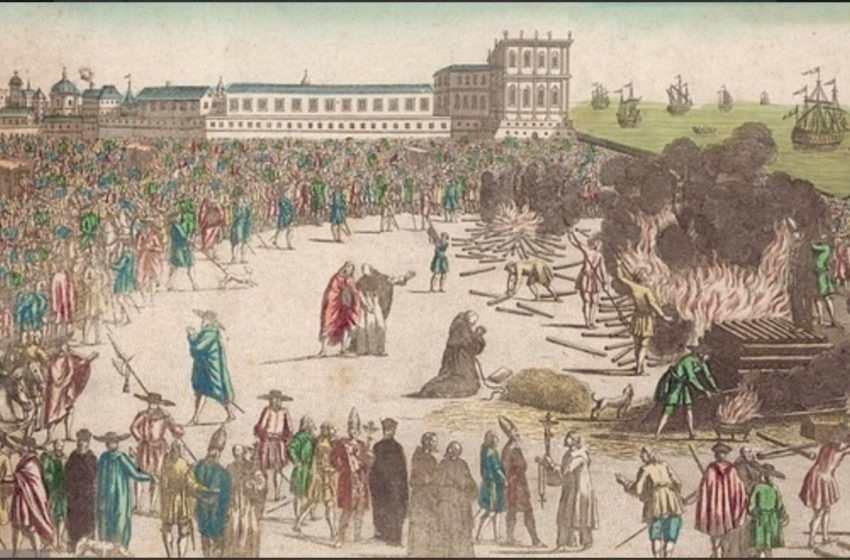 This is the third part of the series of articles on the Goan Inquisition based on the book written by Anant Kakba Priolkar. Part 1 and Part 2 have been written earlier.

Let us now move to Goa of the mid 16th century. Though the Inquisition was officially established in Goa only in 1560, condemning heretics publicly happened much before that.  We will look at one of the first recorded instances of such public condemnations called Auto de Fe.

The year is 1543. A bachelor of Medicine named Jeronimo Dias, a New Christian, during the course of conversation with his friends, utters a few things that were against the Christian faith. News reached the Bishop, who orders the arrest of Jeronimo & questioned his friends. During cross-examination, Jeronimo continues to uphold the beliefs of his old faith (Jewish faith). The Bishop concludes that he is still a closet-Jew and calls for a council to determine the punishment. The council is attended by the Governor, a Teacher named Diogo Borba, Friar Antonio who was the commissary of “St” Francis, and the Vicar General Minguel Vaz. They read the Bishop’s report and conclude that what transpired was indeed heretical in nature. The punishment, as per the justice of the King required burning alive the heretic. However, kind as they were, they offered that should Jeronimo choose to seek pardon & confess his error publicly and desire to die as a Christian, then he will first be strangled to death so that he would not feel the torments of fire. Small mercies, indeed!

It fell upon the teacher, Diogo Borba, to counsel this Jeronimo into accepting his mistake. Thus Jeronimo died by strangulation before his body was burnt. This was the first recorded “Auto de Fe” in Goa. The subsequent Sunday, during the Sermon, the Bishop read out the Papal bull of the Holy inquisition, however, limiting the punishment to excommunication thereby persuading heretics to come out and repent and give up their erroneous ways.

And so it began.

The formal request for the establishment of the Inquisition was made by “St” Francis Xavier who wrote a letter to Portuguese King D. Joao III on 16th May 1545 asking that an Inquisition be established to ensure that the faithful don’t go astray. Xavier was concerned that in a country filled with people who lived as per the Jewish, Mohamadden and Hindu it would be far too easy for the King’s subjects to follow their faith in a lax manner. Joao III pretty much ignored this request. However, more requests for Inquisition in the Indies started pouring in. Despite this, the inquisition wasn’t set up in Joao III’s time.

When Joao III passed away in 1557, he was succeeded by his grandson, Don Sebastian, who at that time was a child of age three. Dowager Queen Cataliana was the regent.

There was a particular incident that expedited the institution of Inquisition in Goa. Father provincial named Gonsalvo Da Silveria and Bishop Belchior Carnerio started preaching against Judaism in Cochin, which made the local Jewish folk speak out against these priests. The Jews & others new Christians responded to this perceived aggression by the two priests by placing in the boxes kept in the churches writings filled with blasphemies against the divinity of Christ, & the Church. The Christian priests couldn’t tolerate this. They pleaded Vicar Pero Gonsalves to act against the culprits. The Vicar agreed and set up a Tribunal. One day, the captain of the city found an error in this procedure and pleaded the vicar to disband the tribunal since it didn’t have official status. However, the Bishop appointed for this purpose sternly told him to “Go back to your fortress. Don’t interfere in matters of faith”.

Following this, several New Christians (only the rich of them!) were arrested and taken to Goa. The Goan authorities wanted to release them on bail. However, the priests protested against their bail in such large numbers that the authorities sent the convicts to Portugal for sentencing.  This incident, coupled with the persistent letters being sent to the crown for the establishment of Inquisition, eventually led to the office of the Inquisitor to be established in 1560.

It was this queen who agreed to the Inquisition, and Cardinal Henrique sent as Inquisitors Aleixo Dias Falcão and Francisco Marques to Goa. The persecution of the New Christians now began officially and it was one of the cruellest Inquisitions in all of the Portuguese empire