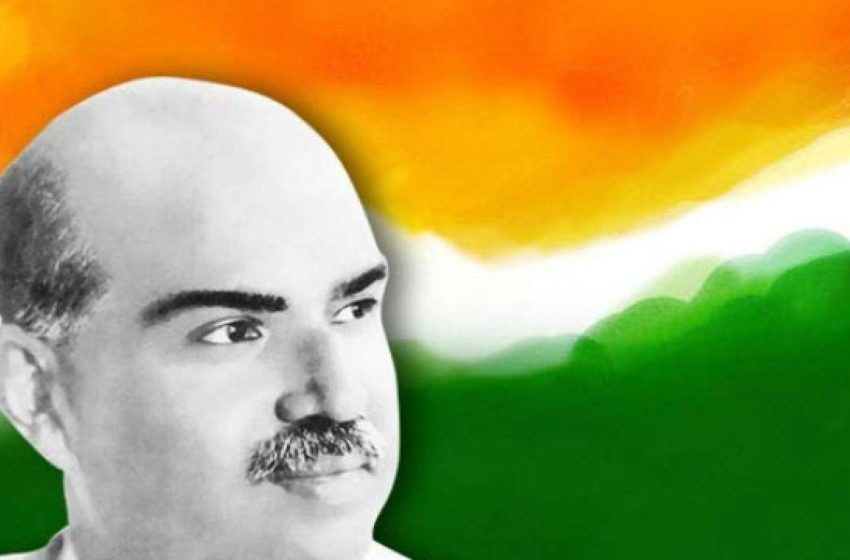 In the previous article of this series, we saw the emergence of Dr. Syama Prasad Mookerjee as the sole Hindu leader against the anti-Hindu policies of the Muslim League government of Bengal, at a time when all hopes seemed lost for Bengali Hindus. In this article, we will be seeing Dr. Mookerjee’s efforts to dismantle the anti-Hindu League government along with his lack of participation in the Quit India Movement which has been used as a major stick to beat him over by the Congress and other secular politicians.

The tacit support lent to Muslims by the Muslim League administration during the Dhaka riots of March 1941 made it blatant that encouraging the anti-Hindu policies of the League, supposedly for the sake of uplifting Muslims in order to maintain a secular environment, would lead Hindus towards a disaster as predicted by Dr. Mookerjee. The Hindu leaders of Congress and Krishak Praja Party, who were till then silently witnessing the discriminatory policies of League, understood the serious implications of having a Muslim League government at the helm in Bengal. One important figure who had a change of heart during this time was the senior Congress leader and brother of Netaji, Sarat Chandra Bose.

Sarat Chandra Bose realized the mistake of encouraging a party full of communal venom like the Muslim League just for the sake of preventing the rise of a parallel political colossus in Dr. Mookerjee and Hindu Mahasabha. He called off the alliance terms struck with the Muslim League by his brother Subash Chandra Bose post the 1940 Calcutta Municipal Corporation elections and joined hands with Dr. Syama Prasad Mookerjee to bring down the League government. As a result of this alliance between the two colossal political figures of Bengal, the League government was brought down in the latter half of 1941.

In order to bring down the League government, Sarat Chandra Bose was entrusted with the task of convincing the Congress representatives of the assembly to revolt against their national leadership and stake the claim to form the government. At the same time, Dr. Syama Prasad Mookerjee was given the task of getting the representatives of Krishak Praja Party and other smaller parties. As stated in the previous article, Haq desired the Premiership more than anything else. Hence, despite the political damages caused to the vote bank of his Krishak Praja Party (which was actually a party of both Hindu and Muslim peasants) by the communal policies of the League, he remained quiet to maintain his Premiership. Dr. Mookerjee understood that getting the support of Haq was important to get the support of the Krishak Praja Party as the party didn’t have any other influential face apart from Haq at that point of time. Hence, he literally pulled a rabbit out of the hat by convincing Sarat Chandra Bose to form a new anti-League coalition government with representatives of HMS, Congress, KPP and other small parties under Fazlul Haq.

The major point to be noted here is that many celebrated historians of the present time have attacked Dr. Mookerjee for forming this coalition government by claiming that he formed a government with Fazlul Haq of Muslim League. But these historians seem to have not read history properly as the records of that time clearly show that Dr. Mookerjee joined hands with Krishak Praja Party against the League. Hence it is important for Hindus to identify the importance of this move of Dr. Mookerjee as it helped them in organizing themselves under an umbrella against the League for the very first time.

The British administration which cosied up with the League to prevent the rise of revolutionaries (who were predominantly Bengali Hindus) tried its best to derail this coalition ever since it was announced. Sarat Chandra Bose, who was supposed to take oath as a minister, was jailed on the eve of the swearing-in ceremony of the new government as the British thought that Congress representatives might back out from the coalition in his absence. However, Dr. Mookerjee was prepared to single-handedly face all sorts of challenges to keep the coalition intact. He not only ensured the continuation of coalition in the absence of the Congress leader but also took oath as the finance minister and became the voice of Hindus in the cabinet. His crucial role in voicing the concerns of Hindus, fending off the attempts of the British establishment to break the coalition and his attempts to reverse the oppressive policies of the League government during his one year stint in the cabinet made people of Bengal called the new ministry of Haq as Syama-Haq ministry.

Apart from the hurdles posed by the British establishment and coalition partners, Dr. Mookerjee had to deal with a huge challenge during the Quit India Movement. Unlike many of his counterparts, Dr. Mookerjee was not convinced about adopting the “enemy’s enemy is a friend” strategy with the Japanese who were moving towards India after occupying Singapore in the early months of 1942. This can be seen from his letter to Governor Herbert dated 26 July 1942 wherein he states, “While the Indians do want the British to go, it could wait till the end of the war, as we most certainly do not want the Japanese to take your place”. This feeling of suspicion towards the motives of the Japanese invasion and the fears of a sinister coalition of the British-League administration in bureaucracy gave both Hindu Mahasabha and Dr. Mookerjee, the fears of ruthless reprisals from the administration on Hindus participating in the Quit India Movement. Dr. Mookerjee had already seen the indifference of Congress towards the atrocities of the League. He was sure that those participating in the Quit India movement will be allowed to meet their fate by Congress. His fears increased after the hesitation of Congress leaders in confronting the League representatives on the matter of partition during the Cripps mission. And eventually, his fears did come true in Bengal. But historians have conveniently ignored this and as a result, we see them bashing Dr. Mookerjee for not participating in the ill-timed and ill-planned Quit India movement even today.

It had become clear by the time of Quit India movement that the British wanted to run Bengal through the Governor and bureaucracy (which was dominated by League supporters as a result of the appointments made under the communal representation scheme of the previous League government), bypassing the ministers in order to suppress the Hindus who were up in arms against the British for the freedom of the nation. Dr. Mookerjee tried his best to tackle the situation by using various tactics like interfering in the affairs of the bureaucracy and confronting the Governor in public etc., However, it made little difference to the attitude of the British. The final nail on the coffin for the uneasiness of Dr. Mookerjee came after the purposeful inefficient handling of cyclone floods in the Hindu-majority Contai town of Midnapore district.

In the August and September months of 1942, Dr. Mookerjee wrote to Viceroy Linlithgow and Governor Herbert against the ruthless treatment meted out by the administration to the Hindus participating in the Quit India movement. The indifferent reply of Viceroy to this matter had Dr. Mookerjee consider the prospects of resigning from the cabinet – as the post of Finance Minister had allowed him to do little for the cause of Hindus in Bengal in recent months – after direct British invention began in the administration. But the incident of October 16, 1942 made Dr. Mookerjee to immediately resign from the Cabinet and independently work for the cause of Hindus against the oppressive British and indifferent Congress.

Following the declaration of the Quit India movement, the Hindus of Midnapore rose in complete revolt. What followed this was a British repression of the worst kind which was led by two Muslim officials in the district administration. District Magistrate of Midnapore Niaz Mohammad Khan and Sub divisional officer Wazir Ali Sheikh, were attracted by the idea of a Muslim Pakistan by partition of India. Hence they were totally into appeasing the British as suggested by the Muslim League for achieving this motive of an Islamic nation within India. As a result, they were determined to violently crush this Hindu revolt for Indian independence. Hence this just call for independence made these League supporting top district officials to punish the freedom fighters by killing and raping them instead of putting them in prison. The British administration was also ready to provide any sort of assistance required by these Muslim officials in order to teach a lesson to the Hindus who listened to Gandhi and joined the Quit India Movement in large numbers. As a result, even calls to bomb certain Hindu localities in Midnapore by these officers were obliged by the British Governor and the same was carried out on 29th September 1942.

The atrocities of these Muslim officers did not stop here. When a terrible cyclone was approaching Hindu dominated Tamluk & Contai subdivisions of Midnapore, the Muslim officers did not feel the need to warn the Kaffirs who were acting as a hurdle in their movement to achieve Pakistan. Hence when the cyclone hit the town on 16th October 1942 which was also the Ashtami day of Durga puja (the biggest festival of Bengali Hindus) the streets were full of people in Contai town.

Normally, as a cyclone is not expected at this time of the year, the Hindus were caught totally unaware. As a result about 30000 people lost their lives in the first 15 minutes of deluge brought by the cyclone and the entire town went under 5 feet of water. Tens of thousands of Hindus lost their lives on that day without a warning just because they participated in the Quit India movement in a district which was governed by Muslim civil servants.

The ministers and public representatives of the province who were stuck in Calcutta at that time were kept in dark about this havoc in Midnapore for several days. When Dr. Mookerjee came to know about this incident, he immediately announced his resignation from the cabinet and rushed to Midnapore. However, no Congress politician of that time ever spoke a word about this incident – as they were made to cautiously maintain a neutral attitude towards the League by the top leadership of the party. Historians also conveniently ignore this incident and wish to live in their delusions of secularism. However, this incident clearly shows the resolve of Dr. Mookerjee. For him, politics and power were meant to be used as means for serving the cause of Hindus. The moment he realized that the British administration would not allow him to help the Hindus of Bengal even when he was a member of the Cabinet, he decided to resign from that position. No one would have questioned him had he continued to remain as a minister even after this incident, as the Congress leaders who led the Quit India Movement were themselves silent on this attitude of the British. But for Dr. Mookerjee, cause mattered more than power. He didn’t flinch even for a second on being the sole member of the cabinet who resigned for the sake of Hindus. This incident of his life serves as an eye opener for all those who claim that capturing and maintaining political power – even by compromising with certain core aspects of the cause/ideology – is more important than anything else. Dr. Mookerjee’s historic life says otherwise. Ideology/cause always mattered more than mere power for him – which propelled him towards becoming the greatest Hindu leader of Bengalis of his time.