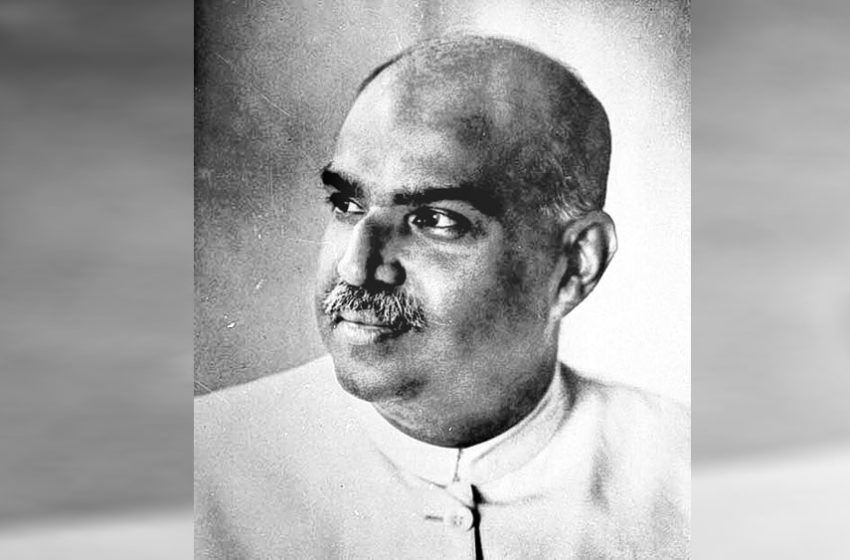 So said poet Harindranath Chattopadhyay on the sudden death, in mysterious circumstances, of Dr. Syama Prasad Mookerji, in detention in Kashmir. Verily Dr. Mookerji was a titan – scholar, statesman and gentleman combined.

After a brilliant academic career, he became Vice-Chancellor of Calcutta University at the young age of 32. He would probably have spent all his life in Academe; but the poisoning of politics with communalism drew him inevitably into public life. Ever since 1930, when he represented the University in the Bengal Council, he became the voice of reason and moderation there. He was horrified when a non-matriculate like Shahabuddin, a -cousin of the Nawab of Dacca, was appointed Vice-Chancellor. Dr. Syama Prasad carried on a raging campaign until the new Education Bill, which sought to further communalise education in Bengal, was dropped.

When Syama Prasad became active in national politics in 1939, Gandhiji invited him to join the Congress, but he chose to join the Hindu Mahasabha, which alone, he felt, could checkmate the growing menace of the Muslim League. Soon the Mahasabha became a mass Party in Bengal.

The Congress had made the tactical mistake of not joining hands with Fazlul Huq’s Krishak Praja Party to form a coalition government in 1937. As a result, Huq formed a coalition with the League and himself joined that Party. When, however, Huq fell out with Jinnah — whom he found “prouder than the proudest Pharoah” — Dr. Mookerji quickly joined hands with him and the two together gave Bengal a non-communal government. The Leaguers used to taunt Huq for having a Mahasabha leader as Finance Minister. And Huq would retort in all good humour: “What is safer, keeping the lion in the cage or leaving him at large?”

Huq in his younger days used to be a junior of Sir Asutosh Mookerji, father of Dr. Syama Prasad, and now the two Syama and Huq, became great friends. Syama Prasad even used to take Huq to Hindu Mahasabha Working Committee meetings.

However, the lion in Syama Prasad was not to remain in the ‘cage’ for long. When the Governor refused to help the flood-hit people of Midnapore to punish them for their active role in the ‘Quit India’ movement he resigned. And his letter of resignation was so scathing an attack on British misrule that the Government banned its publication.

When the terrible Bengal famine came, Syama Prasad was the only prominent Bengal leader out of jail. He served the starving people day and night. When, later, Gandhiji thanked him for his services to the famine-hit, he said he had only done his duty.

When the 1946 elections were announced, Syama Prasad suggested to Nehru that the Hindu Mahasabha maybe let to win some seats to provide a check to the league. But Nehru would not listen. He said Congress was going to contest Muslim seats — and win them? In the event, the Mahasabha got few seats, the Congress lost all Muslim seats outside of NWFP. The demand for Partition became more strident and the Congress caved in.

At this stage, a proposal came up to have an Independent state of Bengal. Had it materialised, West Bengal, including Calcutta, would have also gone out of India. But Dr. Mookerjee would have none of it. He made it clear to Gandhiji that it was a proposal of the British commercial interests owning jute mills, which did not want jute fields to fall in Pakistan and jute mills, in India. He also feared that today it was independent Bengal, tomorrow it may come to independent Bombay and independent Madras. And so the proposal was scotched. Some years later when Nehru said Mookerjee had also agreed to Partition, the latter retorted: “You partitioned India; I partitioned Pakistan”.

When independence came, thanks to the constructive approach of Gandhiji, India got a national government. Although Congress had an overwhelming majority, the new cabinet of 14 had as many as seven non-Congressmen, Dr. Mookerjee, Dr. Ambedkar, Matthai, Baldev Singh, Bhabha, Neogi and Shanmugam Chatty. Today when small little men pettily propose, and no less pettily disprove, the idea of a national government, they need to leam from the example of 1947 to give the country a Govemment of All Talents.

As Industry Minister, Syama Prasad gave the country Sindri Fertilizers and Chittaranjan Locos. In the four years of the pilotage of the crucial ministry, he did not attract one barb·of criticism — so free from blemish was his performance.

However, early in 1949, there was a Pogrom in East Pakistan when lakhs of Hindus came over. Sardar Patel asked Pakistan for a territory to settle these refugees. And Nehru talked of “other methods”. However, soon after, the government signed a lifeless Nehru-Liaqat Pact and Hindus in East Bengal were forgotten. Syama Prasad resigned in protest.

Dr. Mookerjee now came out and organised the Bharatiya Jan Sangh (BJS) (now renamed Bharatiya Janata Party) in consultation with Shri Guruji of the Rashtriya Swayamsevak Sangh (RSS). Nehru threatened to “crush” BJS; and Mookerjee said: “We will crush this crushing mentality.” Although the new party didn’t win too many seats, it secured more than 3% of the popular vote and thus qualified as one of the five recognised National parties. Also, Syama Prasad lost no time to forge a United Democratic Front consisting, among others, of BJS, Socialist Party (SP) and Kisan Mazdoor Praja Party (KMPP). Within days, he became the unofficial leader of the opposition. Dr. Mookerjee’s UDF was the precursor of SVDs in 1967 and Janata Party in 1977. It was of this brief but glorious period that
Harindranath said:

“He gave us the impression of a tree
With thoughts about him like to foiIage packed …
Friend! we shall miss your presence and your speech
Which thundered fN8fY time you rose to speak.”

Many people saw in him the future Prime Minister of India. But that was not to be. Kashmir was almost as live an issue then as it is now. The BJS challenged the separate special status of Kashmir and took the line —

A big Satyagraha movement was launched in Delhi, Jammu and Kashmir. Dr. Mookerjee, himself defied the Permit Rule and entered the state on May 11, 1953, without the obnoxious permit. He was promptly arrested, driven all night to Srinagar, kept in and out of the way cottage and, on June 23, they announced that he was dead! Nobody was ever told that he had been ailing in detention. The whole country was shocked and scandalised. Moving messages of condeIence poured in from all over the country. Fazlul Huq cried in Dhaka: “The loss of the only brother I had in this world, has driven me mad with sorrow.”

When it became known that Dr. Mookerjee had been moved for treatment to a “Nursing Home” which did not have even oxygen, many described it as “medical murder”. Dr. Ambedkar said even vagrants were sent back to their respective states, and not kept in jail. He demanded to know why Sheikh Abdullah had kept him in jail and not sent him back to Delhi or Calcutta. When Nehru wrote to Syama Babu’s mother, Lady Jog Maya Devi, condoling the death and asking what he could do for her, she asked him to appoint a judicial inquiry into his death. But there was no inquiry; only a big black cloud of doubt and suspicion. All Nehru did was to remove Abdullah and abolish the permit system. Had he cut at the root of the mischief Article 370 right then, there would have been no trouble in Kashmir today.

In his death, no less than in his life, Syama Prasad served the unity and integrity of India. Today the BJP is a living and growing monument to his life, work and thought.