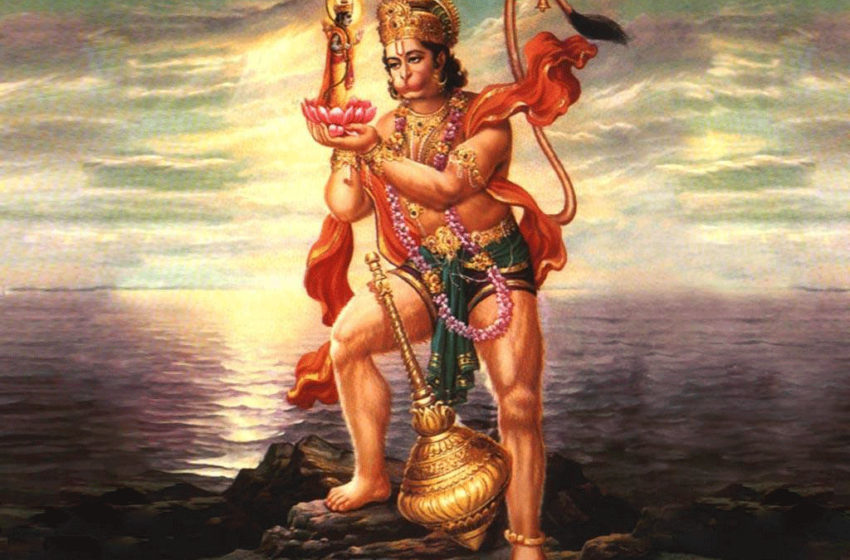 Today is Hanuman Jayanti- the day the Eleventh Rudra took birth in the embodied form on this earth. He is said to be a “monkey god” (which is technically incorrect because he is a Vanara, a celestial species which only looks like an earthly monkey, but is very different from them), and we humans are said to have evolved from monkeys- ergo, it is assumed that we ought to be “better” than them.

In today’s day and age, when weakness and incompetence have not only become the norm, but are actually being celebrated as a virtue, it’s very important that we look at this icon of our past and reflect on whether we have actually evolved into a better individual, better society from thousands of years ago when events of Ramayana transpire or have we actually devolved into more primitive beings.

VakyaKovid: Language today is one of the most potent skills. The preciseness and suitability of the spoken word is an art to be mastered. In the real world where things happen, things are made to happen by people moved by the words of their leaders. And Hanuman, the Anjaneya-son of Anjana- is the master of spoken word, known for his skillful and precise Vaak (speech). One of the first description of Hanuman in Ramayana occurs thus:

Even Rama says this to Lakshmana on his first interaction with Hanuman, referring to Anjaneya’s learning and mastery of speech:

Further, as the story progresses, Anjaneya exhibits this quality repeatedly, while meeting Maa Sita, Ravana, Vibhishana, and even when he is counseling Rama or meeting Bharata. This aspect of his learning and speech finds mentions in many of his names: प्राज्ञाय, नवव्याकृतपण्डिताय, वागधीशाय, वाग्मिने,सीतान्वेषण, पण्डिताय. With cancel culture and social media censorship looming large, the art of ‘monkey balancing’ the speech becomes even more significant.

DridhVrati: One of Anjaneya’s many names, it shows his willingness to go through everything for achieving his Sankalpa- even if it means facing Bramhastra and becoming a prisoner. As Tulsidas says:

Until he accomplishes his task he does not rest – even a cursory reading of Sunderkand will testify this. Firstly he tells the Mainak Parvat,

(I can’t rest till I accomplish Shri Rama’s task)

Again, after reducing Lanka to ashes…

This aspect of life was recently highlighted by Jordan Peterson in his latest book where he says, “Imagine what you can be and then aim single-mindedly at that”. Anjaneya is the embodiment of that ideal, that ideal, that rule of life.

Strength and Power: Without physical strength and Shakti, no amount of intellect helps. A cursory look at Hindu male demography will prove this fact. In contrast to this, Hanuman is the strongest being in the universe, He is the source of all “बल” so much so that he is called “अतुललत बल धामा”. This includes all kinds of strengths- spiritual, mental, physical, Vital (he is the Mukhya Prana). This tempered with his immense Tapobala, thus endowing him with the Viveka to use the appropriate kind of strength at the appropriate place, in the right amount. That’s why Maa Sita made him the provider of all Siddhis and Nidhis

(Being free from despair is the root cause of prosperity. Freedom from despondency gives
supreme happiness and leads to success.)

This is what Anjaneya tells himself in Sunderkand when all his efforts to trace Janaka Nandini
in Lanka fail.

He further says the action of a living being always bears fruit (consequence), therefore he would put his best effort.

When actions of every living being are always said to bear fruit, it’s beyond imagination what could be even the bare minimum of human ingenuity, when best efforts are put. Further, Shri Guru Rohit Arya says that among humans, Hindus are Amaratsva putra of Shiva himself, so we should strive to be worthy of it. Again in modern times, I cannot help but draw parallels with Jordan Peterson’s dictum “Don’t allow yourself to become resentful, deceitful and arrogant”… Isn’t it so that our beloved Anjaneya never resentful, and always humble and
dependable?

Master of Prana: Prana is the cause of all activities in the world. Swami Anjaneya is Mukhya Prana. He knows no inertia. His presence alters the course of events throughout the Ramayana. From crossing the sea(सागरोत्तारकाय), assuaging Sita’s sorrow (सीताशोक ननवारक), devastating Lanka (लङ्कापुर ववदायक), moving Gandhamadan for Lakshmana (गन्धमादन शैलस्सर्थ), he is the prime mover. He is the very opposite of inertia (अजाड्यम). And inertia is the biggest enemy today facing the Hindu society.

Dharma over political allegiances and considerations: Politics and political dispensation are temporary; only Dharma is shashvat, eternal. Throughout the Ramayana, Anjaneya never attached himself to any ideology but only to Dharma- and Rama who was the embodiment of Dharma (रामो विग्रहवान् धर्म साधु सत्य पराक्रमः). He never ducked behind the excuse of “There Is No Other Alternative” to despotic tyrants like Ravana and Vali, or negligent rulers like Sugriva -he oriented himself to the never-decaying presence of Rama and Dharma, and he devoted himself to do the work of both.

This helped his political allies and masters as well- Vibhishana and Sugriva benefitted from this devotion of Anjaneya to Dharma when they overcame seemingly unassailable adversaries because of the alliances Anjaneya forged for them with Dharma/Rama.

Politics is downstream from culture and culture flows from the glacier of Dharma: In line with this attachment to Dharma, he chose to be a Brahmachari, but he never forced it on anyone or went about certifying moral virtue based on Brahmacharya. He counseled both Sugriva and Vibhishana, but did not force Brahmacharya on them. This is a lesson to many Hindus who are torn between sermons of Brahmacharya and their own carnal desires. In all such cases the answer is behind the doors of Atamavichar and optimization, and “Rama nama” is the key.

In today’s world, Anjaneya is the Male principle that can be a guiding light to the confused populace of Hindu Males. From being treated as expendable to being taunted as “bhakta”, he has seen it all. He is lying latent inside all of us because of his childhood curse that he would remain dormant and latent until called forth. He is as much inside the average officegoer who is scared to speak his mind but also tired up of being belittled (much like Sugriva or Vibhishana), as he is inside a soldier or a police officer holding his weapon and culling the anti-social elements and enemies of the state around him. He is waiting to be called forth as he watches his polarized and pulverized hosts, who are often lost in crossroads of various modern ideologies competing for his allegiance.

The key to awakening him is to call him forth, and to call him forth, one has to know him- like
Jambavant did. Jambavant knew Anjaneya even when Anjaneya himself had forgotten his
strength, when his Self was temporarily clouded from his own memories- the king of bears
Spoke to him, awakened Him from the slumber. We need to do the same- our selves have to
play Jambavant, calling forth the Self, the sleeping Anjaneya. The key to do this is to drop
everything and follow the integral path shown by Anjaneya- all questions will sublimate, and
Vision will emerge.

Hemant Pandey is a seeker and an ardent devotee of Anjaneya. He also works as a police officer for living.