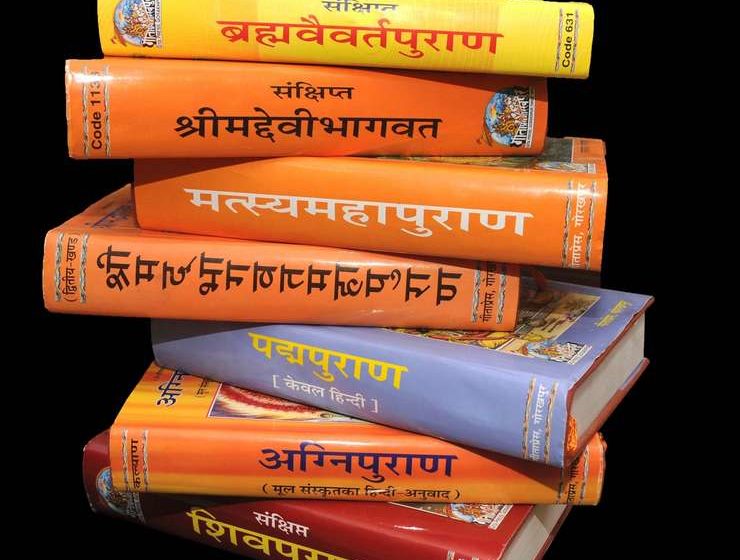 (This is an extract from the book “The Beginning of Hindu Culture as World Power (AD 300- 600)” authored by Benoy Kumar Sarkar in 1916. Benoy Kumar Sarkar was a social scientist, professor, and nationalist. He founded several institutes in Calcutta, including the Bengali Institute of Sociology, Bengali Asia Academy, Bengali Dante Society, and Bengali Institute of American Culture. Sarkar wrote in five languages, his native Bengali, English, German, French and Italian, publishing a large volume of work on a variety of topics, including 53 books and booklets in English alone, his written production amounting in all to some 30,000 pages. He even authored a piece about Hindu Rashtra in Syama Prasad Mookerjee’s Bangabani)

With the establishment of the Guptas at Pataliputra we enter modern India. The beginning of Vikramadithyan Imperialism is the beginning of modern Hindu religions. It was the age of Puranas, of Sanskrit revival, of well-peopled pantheons of deities, of spiritual inspiration as the nurse of sculpture, and of religion as the handmaid of Art. The modern Hindu of any denomination, Jaina, Mahayanist, Shaiva or Vaishnava, can easily understand the Vikramadityan Kalidasa, and parley with him without a special preparation. But the preceding Andhra-Kushans and the still older Mauryas are to him considerably antique and archaic. The currency of thought, the conventions and technique of life obtaining in the age of the Raghu-vamsam are almost the same as to-day, but the Hindus of the age of Arthasastra or even of Aswaghoda’s Awakening of the Faith in the Mahayana thought in other terms and lived in other spheres. To take a simple analogy. As Chaucer is to Shakespeare, so is Kautilya to Kalidasa; and as Shakespeare-cum-Bacon is to Bernard Shaw, the socialist, so is Kalidasa-cum-Varahamihira to Rabindranath Tagore, the modern nationalist. And this as much in religion and morals as in literature and art.

It has been well said that the appreciation of Milton’s poetry is the last test of consummate Classical scholarship. It may be said with the same force that the appreciation of Kalidasan literature is the last test of consummate Puranic scholarship. To enjoy the merits of this art one must be well grounded in the Puranas. The religious life of the Puranas is the atmosphere of Kalidasa’s poetry; and the Puranas (including the Ramayana and the Mahabharata) are repositories of whatever had been taught in the Vedas, Upanishads, Nirvanistic suttas, Arthasastra, Gita and Vedanta. In reading Kalidasa we seem to be turning from the Santiparva of Mahabharata to a chapter of Puranic mythology ; at one place we seem to be listening to the lectures of Manu the law-giver, at another the sublime rhapsody of the Valmikian bards. Kalidasa wrote of Rama-incarnation, sang hymns to Vishnu, the Lord of the Universe, dipped his pen deep in the Shaiva lore, and had thorough mastery over the Renunciation-cult, the doctrine of self sacrifice, etc., preached by Sakyasimha. The literature of Kalidasa is thus the art-form of that religious eclecticism which has characterised Hindu life in every age. The sculpture of the Gupta era also bears eloquent testimony to the same toleration and goodwill between sects and denominations.

The Puranas had been growing since at least Maurya times, as Smith notes in reviewing Pargiter’s Dynasties of the Kali Age;  in the time of the Guptas they were fully recast, re-interpreted and brought up to date, as Sir Bhandarkar suggests. The days of the Prakrit languages had long been over. Sanskrit was now the language of culture and religious literature with all sects of Hinduism. No longer the uncouth Vedas, no longer the Pali Tripitaka or the Prakrit Jain a Canon, but works like the Puranas in simple, chaste and elegant Sanskrit were the Bibles of the Gupta age. The eclectic religion of these Sanskrit Puranas was but a representative expression of that Religion of Love which had by this time established a secure empire over the Hindu heart, Jaina, and Mahayana, Shaiva and Vaishnava. We noticed the beginnings of Bhakti, modern mythology, avatara-cult, etc., in Maurya times, and traced their well formed limbs in the Andhra-Kushan era. By the time of the Guptas they had become the A. B.C. of Hindu thought.

The spiritual trend of the times that can be known from the scriptures of the Jainas, Shaivas, Vaishnavas and Buddhists indicates a common belief in human infirmity, and the efficacy of prayers to a loving personal god. According to Jaina doctrine, it has appeared in successive ages on earth, teaching mankind to spare all life, even of the lowest creatures, and to hasten the salvation of their souls by mortification of the body.

That this Jainism was, like Shaivism and Vaishnavism, only one of the sects of Hinduism, would be apparent from the following account in Stevenson’s Heart of Jainism. “It had always employed Brahmans as its domestic chaplains, who presided at its birth rites and often acted as officiants at its death and marriage ceremonies and temple worship. Then, too, among its chief heroes it had found niches for some of the favourites of the Hindu pantheon, Rama, Krishna and the like.”

It is thus difficult, as has been indicated in a previous chapter, to distinguish the images of Jaina gods from those of the Buddhist, Shaiva and Vaishnava pantheons. The bhakta could not do without the form of his love, and converted religion into a handmaid of art. The lover and the artist have ever been convertible terms, because self expression is the common characteristic of both. In the present instance, the bhaktas or artists of all denominations expressed the same self. The same religious imagination was drawn upon by sculptors whether for the Jaina devotee or for the Shaiva. Images originating from the same heart could not but come out with the same marks. Art could not improvise or manufacture differences where the inspiration was the same. The differences have to be made out only in a few externals.

Jainism in the form in which it is difficult to distinguish from other isms of India had a prosperous career since the beginning of the Christian era. Mrs. Stevenson says :

“The faith spread over the whole of the west and rose to great prominence and power in Gujarat. We have also evidence of its activity in most parts of Southern India during the first millennium of the Christian era… In South India, the earliest literary movement was predominantly Jaina. In Tamil literature from the earliest times for many centuries Jaina poets hold a great place. The Jivaka Chintamani, perhaps the finest of all Tamil poems, is a Jaina work. Eight thousand Jaina, it is said, each wrote a couplet, and the whole when joined together formed the famous Naladiyar. More famous still is the Thirukkural of Tiruvalluvar, the masterpiece of Tamil literature.”

The worship of Shiva also has been handed down from earlier times and counted many votaries in the Gupta age. Specimens of Shaiva faith are being given from South Indian Tamil literature of a later date. Barnett writes:

“No cult in the world has produced a richer devotional literature, or one more instinct with brilliance of imagination, fervour of feeling, and grace of expression. Of its many great poets the greatest is Manikka-Vachakar (llth century A.D.). Manikka-vachakar is the favourite poet of the orthodox Sivaite Church. Its rites inspired many of his hymns, and he has found his reward in being sung in numberless temples.”

The Imperial faith in Vishnu and the Puranic legends of Krishna is well illustrated by an interesting incident in connection with Skandagupta’s defeat of the Huns between A.D. 455 and 458. Vincent Smith narrates the story thus :

“His mother still lived, and to her the hero hastened with the news of his victory, just as Krishna, when he had slain his enemies, betook himself to his mother Devaki. Having thus paid his duty to his living parent, the king sought to enhance the religious merit of his deceased father by the erection of a pillar of victory, surmounted by the statue of the god Vishnu, and inscribed with an account of the deliver of his country from barbarian tyranny through the protection of the gods.”

The above interpretation of the Puranic Krishna-story has a parallel in the annals of Europe also. In the 17th century William of Orange was regarded as an avatara of the Old Testament gods who had come down among the Dutch to deliver the people from the fetters of Louis XIV and thus affect an Yugantara or revolution in Zeitgeist. Thus Macaulay writes of the mission of William in his History of England, vol. I:

“The French monarchy was to him what the Roman republic was to Hannibal, what the Ottoman power was to Scanderbeg, what southern domination was to Wallace. Religion gave her sanction to that intense and unquenchable animosity. Hundreds of Calvinistic preachers proclaimed that the same power which had set apart Samson from the womb to be the scourge of the Philistine, and which had called Gideon from the threshing floor to smite the Midianite, had raised up William of Orange to be the champion of all free nations and of all pure churches.”

It is essential to remember that instances of a Vaishnava Shaivaising and a Shaiva Vaishnavising were as common as those of a Jaina Vaishnavising and a Vaishnava Jainaising, and so forth. Thus, declarations of the Lord like “I am Vishnu, I am Brahma, I am Shiva” abound in Mahabharata and Purana literature.

BUDDHISM MIXED UP WITH OTHER ISMS

This was the fountain at which the great bhakta of China, Fa-Hien, came to quench his spiritual thirst. The Celestial missionary found bhaktas everywhere in India. It was the era of romanticism and spiritual ecstasy known under diverse names, Jaina or Vaishnava, Buddhist or Shaiva. If the devotees differed from one another at all, it was only in the name of their Love and Lord, not even in the method of approach, because the approach to Love must ever be the same. They differed probably in some externals of life, e.g., as to the method of using the toothpick, or shaving the head, or as to the proper times for religious worship, ablutions, etc.

It was impossible for Fa-Hien to get a “well” of Buddhism “undefiled” as it was impossible for others to get a “well” of Vaishnavism “undefiled” or a “well” of Shaivism “undefiled”. All these isms were gushing forth mixed up with one another from the same whirlpool of devotion. It was out of the question for those who lived at the time to mark out the individual characteristics of each faith, as it is hopeless to-day for scholars in the library to dissect the special strands. The anatomists of those Religions of Bhakti or Heart-Culture would only succeed by sacrificing the unifying physiology of Love. So the Vaishnava and the Jaina, the Shaiva and the Buddhist of the Gupta era sat at the same well of devotional eclecticism and raised “one music as before but vaster,” thereby developing the Bhakti-cult and Romanticism of the Puranas.